The winter after Julianna died was bitterly cold. It snowed and sleeted, iced and froze. Winters are usually mild in this part of the Northwest, but the winter of 2016 was an aberration: harsh and unrelenting, but also fitting  for my own season of deepest loss.

I worried about Julianna’s little dogwood tree, the one that received farewell messages of love during her tea party. We made it the centerpiece of our front yard and it stood unsheltered from the biting wind. Would it be OK? It had to survive, I told Steve. It just had to.

It did, and when spring came, I wondered if it would bloom. Young dogwoods, I read, may not bloom for a few years, especially when stressed.  That April, the neighborhood pear trees unleashed their usual arsenal of stunning pink flowers, but our dogwood stayed bare. It’s OK, I thought. It’s just a baby tree; we mustn’t expect too much.

And then in June, a week before the day I had been dreading, Julianna’s baby dogwood tree gave us this: 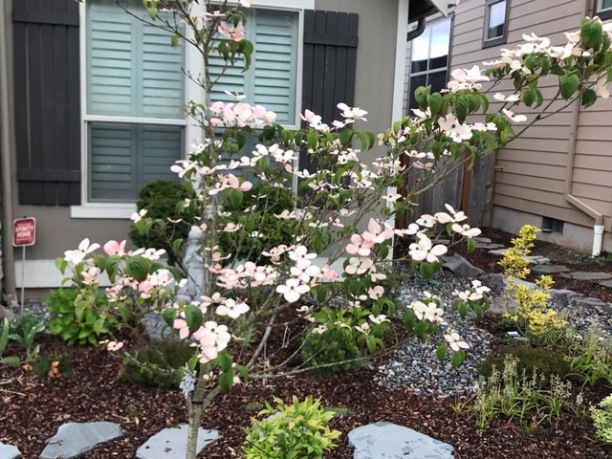 It was a late bloomer, but for us, the timing was perfect.

Julianna’s tree is a toddler now, and like a growing child, its size sometimes catches me off guard. Could this much time really have passed?

Three years. She’s been gone for three years today.  It’s unbelievable except for the fact that I’ve lived it.

Time dulls, it doesn’t heal.  It’s a blunt instrument that creates distance, from things we want to forget and that which we want desperately to remember. I am further away from the searing pain of fresh loss, but it’s harder to remember the sound of her voice. It’s another way of losing her.

On that morning she left us, I just wanted the world to know that there was a girl named Julianna.

Three years later, it’s the same. Julianna. She struggled, she soared, she laughed and lived and loved. She put things in their proper place and dared us to do the same. She let us in and we could experience, for a little while, a fantastic and colorful world powered by her imagination and heart, the strongest, purest and loveliest of hearts.

She occupies the most tender and fierce part of my own heart. It let me love her with abandon even as I knew I would have let her go. And now, it mourns her– always, it will mourn her, even as it rejoices in the pink sky.