She would have been seven today.

If only her nerves worked. (Not the metaphorical ones that are equated with bravery. Those, she had in abundance and they worked just fine.)

If only they were able to carry the signals from her remarkable brain down to her arms and to her legs. Where would she have gone? How hard would she have hugged?

If they had done their job, the muscles she needed to breathe would have been strong, and she would…not even notice.  Because breathing should be effortless. What would her laugh have sounded like?

If those stupid nerves worked, she would be here now. There would be cake, and it would be pink and she would be able to eat it with her own hands. She would swirl around in a flouncy dress and tear open presents (Or maybe not. She never let us rip up wrapping paper. She couldn’t hurt anything that she found beautiful, and to her, most things were beautiful.) She would run around, fueled by a little extra sugar and an abundance of love. It would be what every little girl should experience on the day she turns seven.

Instead, she is five. She will always be five, except for the times I think about her at two weeks (the most wonderful peach fuzz baldness), four months (COLIC!) or two years (sparkling eyes). She will always be my baby and my big little girl; never a teenager, never an adult.

I have always loved bald babies.

In between rounds of colic. She looks deceptively sweet here… 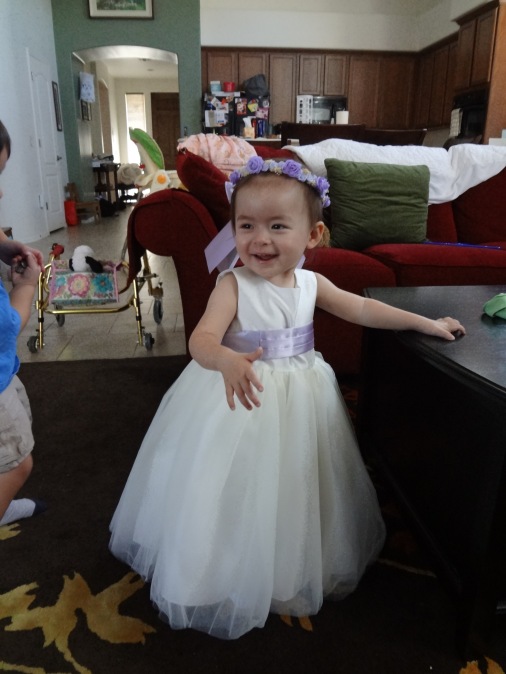 Trying on her flower girl dress. Her gold walker is in the background. She is almost two here, and I was sure that she’d be able to walk down the aisle if we worked hard enough. We did — and then worked hard to turn a wagon into a cloud-like carriage fit for a princess-to-be.

Maybe it’s a waste of time to think about the “if onlys.” It’s like reasoning with a thunderstorm or asking gravity to take a little break.

Julianna body was her Achille’s heel.  We propped it up, outsourced what we could to machines and coaxed it along, but it was a losing proposition. The problem was in the DNA, and it could not be fixed by twenty-first century science: my heartbreak was guaranteed.

For a while, I tried to resist. Her disease was a beast. We threw everything we could at it, but it only grew stronger. At my lowest point, the little girl lying in the bed — the one who couldn’t even scratch her own nose without my help — terrified me. She would leave me one day, and I would be broken.

And yet, I couldn’t help myself. She was so easy to love.  You just had to take her hand and say “yes” — yes to her brightness and her beautiful way of seeing the world. She made me better, in so many different ways.

Love was her superpower and it overcame my fear.

It hurts — in a way I cannot yet describe – not getting to seven (or ten or forty five).  But love is stronger than the pain and bigger than the emptiness — every second of every day.

Even on the day that she would have been seven.