Do you believe in miracles? I do.

Miracle #1: How does a five-year-old go an entire year without having a single cold?

The average child gets six to eight colds per year. Until yesterday, Julianna didn’t have even the slightest hint of a runny nose.

Miracle #2: The thing I had been dreading came to pass yesterday, and we are still standing.

Our usual pattern is that J goes from runny nose to needing ICU level support in less than 48 hours. Yesterday we started antibiotics, went up on her BiPAP settings and began supplemental oxygen. We had to do a lot of cough assist to go after junk from her lungs – but it all cleared, and she didn’t spend a lot of time in discomfort.

J usually can spend no more than two hours at a time sitting up in her chair. Yesterday, she couldn’t lay down for more than thirty seconds before getting short of breath. We had no idea how she was going to sleep, and we braced ourselves for a rough night. J’s grandparents came so that we could work in shifts. Around 8PM, J could suddenly lay down. I have no idea what changed, but she slept pretty comfortably through the night.

J could barely talk when she woke up this morning. This has never happened before, and I know she didn’t like it. I told her it was OK. She could still speak to us through her eyes and her movements. Her friends and caregivers could still play with her because they have had a lot of practice acting out her stories. And I know her heart. She has shared her heart with me, and it is beautiful. We don’t need words.

Around 11AM, her voice came back – a tiny, high pitched thing, but a voice nonetheless. J calls it her “Squeaky” voice. “I love my squeaky voice!, she said.

Her voice has gone in and out through the day. I told her that she may not have her voice again in the morning – but I think it’ll come back.

What makes this a miracle? Julianna’s vocal cords are partially paralyzed. It’s another stupid complication of her stupid disease. People get laryngitis all the time – they lose their voice and it’s not a big deal. We have known for a long time that any inflammation of J’s vocal cords could be dire. Today, it wasn’t.

We are in uncharted waters. We’re home instead of the hospital, and it hasn’t been as awful as I feared. These are the moments we made:

Steve picked up this massive dollhouse at a garage sale for $25. It was supposed to be a birthday present, but we never found the time to clean off the dust. Yesterday afternoon, we made the time and gave it to her. She has been having a blast. Her fairies, ponies, dragons and princesses finally have a place that they can all call home. (It does only have one bathroom, though. I asked J how they could all share one bathroom. J gave me a look and said “Play!” She doesn’t have time for ridiculous questions.)

a silk fan as a towel? it’s a princess thing.

J got a “bed bath” today, and we made it into a spa experience with lavender soap (like Fancy Nancy, she thinks everything from France is divine) and a silk fan towel. Later, she asked to go under the silk and called it a “clubhouse.” Rules of her clubhouse? 1) Be pink always! 2) Bring a diamond every day (We asked, and CZ is also acceptable. J is no snob.) and 3) Never leave.

j and her friend c – in the clubhouse

(And this is actually miracle #4)

Christmas is coming early, and it is joyful — despite our circumstances.

We are guilty of not knowing most of our neighbors. They are reaching out, though, and covering us with love.

j and a and the parol

A few nights ago, a group from our neighbor’s church blessed us with Christmas carols. They sang “Hark the Herald” (J’s favorite), Silent Night (with even a verse in Korean) and more. It made me cry – and J dance. They gave us a parol, a lantern from the Philippines that represents the Star of Bethlehem.

alex and steve thought we should open a few presents each day. j wanted to open them all now. guess who won?

This morning, a basket full of Christmas presents was left at our door. It was from more neighbors who gave gifts that represented the Christmas traditions from their native lands. 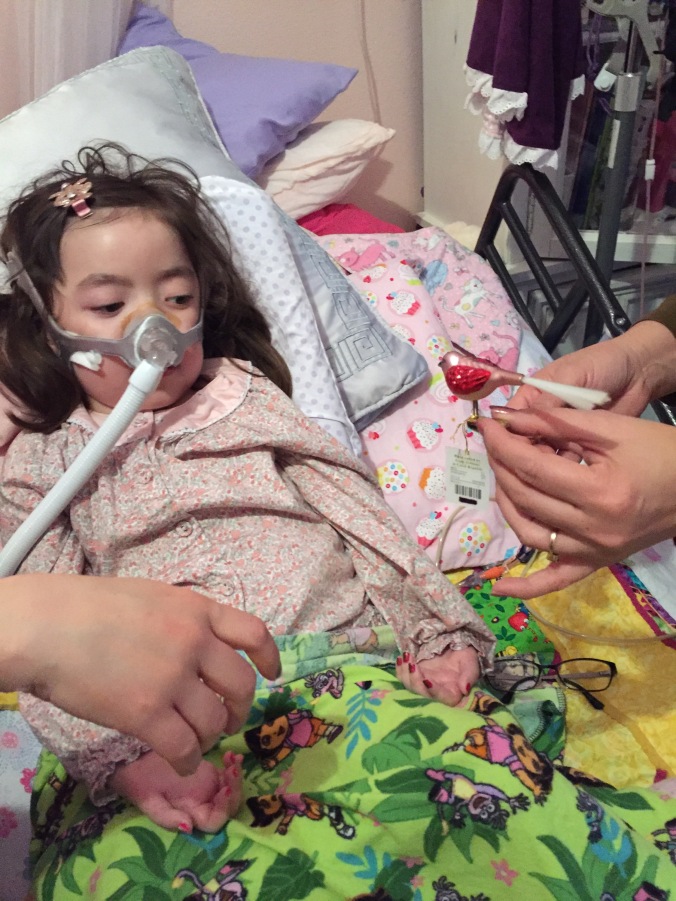 this little pink bird is from the Czech Republic. j named it Strawberry 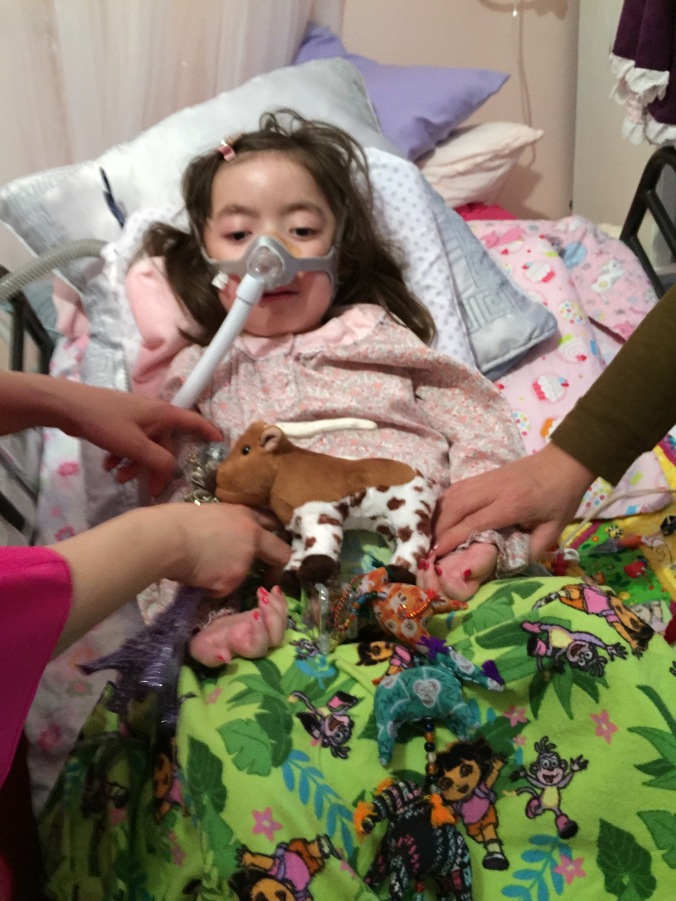 In my former life, I loved to travel. I wish I could show Julianna the world, but right now, it’s a challenge even leaving her room. Today, she saw a little bit of France, Texas, India and Indiana.

What I wrote yesterday is still true: we don’t know where this is going. Julianna has the strongest heart, spirit and mind of anyone I’ve known, but also the frailest body.

I do know this: we are here through God’s grace. He has surrounded us with it.